Asahi & Yuuhi Jinja
These shrines are on the east coast of the Noto Peninsula in Toyama-ken. They are the morning and the evening shrines, for sunrise and sunset. The first enshrines Amaterasu/Amateru, and the other Toyouke Kami. We know from Woshite studies that Amateru was the grandson of Toyoke/Toyouke. They are respectively enshrined at Ise Jingu Naiku and Ise Jingu Geku. The Asahi and Yuuhi shrines are across highway from Toyama Bay. Both Asahi and Yuuhi shrine buildings were constructed in 1689.

Asahi’s first torii faces north. We measured the direction that the hall faces and it turned out to be 116 degrees SE. GPS readings were 36 degrees 55 min N, 137 deg 1 min E.
It is said that the kami of Ise Jingu, Amaterasu/Amateru was brought here before the Kamakura period (1185–1333). In olden days this shrine was revered as ubusu-gami, guardian of one’s birthplace. Both shrines are approached by a climb upwards and the prayer hall is on one’s right. The buildings are encased in glass (winters are extremely cold and snowy here) and so do not appear remarkable from the outside.
Just past the torii, we see the lanterns flanking the kaidan. So up we go. Along the way is this marvelous stack of stones. 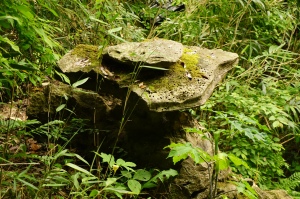 We reach the shrine hall and it looks very plain in its winter coat. But when we take a peek through the glass we see the lovely hinoki wood and a traditional capped hashira post.

Yuuhi Jinja is 500 m north of Asahi. It is adjacent to a school which you can see in the background. Although this sando faces the bay in the east, the shrine building is facing a southwesterly direction, sitting on the rock of the low mountain. 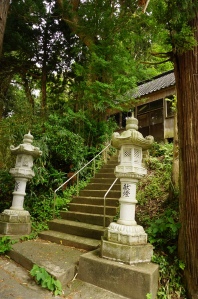 Yuuhi Jinja was formerly dedicated to Kunitokotachi, the earliest named kami. However, since Asahi corresponds to Ise Naiku inner shrine for Amateru, Yuuhi is considered the Geku outer shrine for Toyouke-kami.