This wonderful geology museum is located in the city of Itoigawa. It is named after the Great Crack in the middle of Japan, the terminus of the Japan Median Tectonic Line (map below). The Fossa Magna (Latin for great rift) refers to the place where Pacific/Oceanic and Continental plates meet. You can learn all about it at this museum. Itoigawa is the home of Japanese jade, and this is its museum.

Itoigawa is a charming small city on the coast of the Japan Sea, in the prefecture of Niigata. Itoigawa is on the Japan Median Tectonic Line, and its location is marked with a red arrow. The Fossa Magna zone is shown in yellow. Itoigawa is known as Japan’s source of jade, the mineral/gem jadeite. Jade has a long history in Japan, and it has been worked by early Jomon people. Jadeite is called hisui. It is usually written in kana characters, ヒスイ or  ひすい , so perhaps this term is of Jomon origin. Jadeite was named the National Stone of Japan in 2016.

In Koshi-no-kuni, also known as Esshū province, now known as Hokuriku, a folk heroine of Itoigawa is Nunakawahime. Legend says she was beautiful and wise, and she knew how to make magic using jade. Her fame was so great that the famous Ōkuninushi came from Izumo in the west to win her hand. And he did. Their son became Takeminakata, the kami revered at Suwa Taisha in nearby Nagano. This statue of Nunakawahime holding a large jade stands on the north side of the Itoigawa station.

Birth of the Oldest Jade in the World

How was jade created? The process began 500 million years ago. Jadeite crystallizes from a hydrothermal liquid in the subduction zone of two tectonic plates. In a zone about 30 to 50 km below the surface, elements (Na, Al, Si, and H2O) formed jadeite at temperatures of 250 to 650 C. Jadeite was created during the period 100 to 500 million years ago. 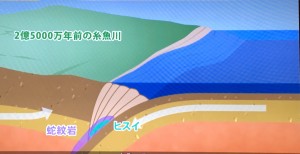 Itoigawa lies on the border of two plates. 250 million years ago, the Oceanic plate (right) pushed below the Continental plate (left). Jadeite (colored turquoise) that had been created deep below rose to the surface.

Jadeite comes in various colors depending on the elements present in it. The colors range from white, through various shades of green, lavender, and blue, to black.

History of Jade in Japan

6000 years ago, jade jewelry in the form of small pendants were made. They were of gemstone quality and may be the oldest human-worked jade in the world.

5000 years ago, there were jade workshops making larger pendants in Itoigawa, as found at the Chojogahara and Teraji archaeological sites in Itoigawa.

3000 years ago, magatama pendants were made.

Magatama means curved bead. They were generally comma-shaped, hence their name; they were also in the shapes of animals and insects.

8th century, a Buddhist statue, containing jade, is made for Todaiji. Subsequently jade mysteriously disappears from the scene. It was believed for a long time that there was no more jade in Japan.

In 1938, the tanka poet Gyofu Soma suggested that jade might be found in Itoigawa because of the Nunakawahime legend. And jade was rediscovered in Japan.

Fossa Magna and The Birth of the Japanese Islands

There is a stunning video at the museum which explains the role of the Fossa Magna in forming the islands of Japan. The Fossa Magna was once under sea. 20 million years ago, the land was still connected to Asia. Then it broke apart from Asia and the Sea of Japan was created. The land split into two parts: the southern part of the land rotated one way and the northern part rotated the other way, creating an opening, like a door. Fossa Magna was in the sea in this gap. Then the eruption of subterranean volcanoes filled the Fossa Magna sea with ash, sand, and mud. And connected the two parts of land. Thus was the main island of the archipelago created. Volcanoes on land formed 2.6 million years ago in the Fossa Magna zone, like Mt. Fuji on the main island of Honshu. The dark area in the middle is the Kanto Mountains, and Mt. Fuji is on the left edge.

We have learned about Narasaki Kougetsu and the Katakamuna documents which he recorded. Now let us look at his technical work. Narasaki was an eletrical engineer working in the mountains of Hyogo-ken after the Second World War. His work involved electrical power lines with special interest in their effect on the growing of plants and crops. His field work included studying the terrain in the mountain range of Rokkosan. Narasaki found that the location of an iron foundry could be correlated to superior or inferior grades of iron produced there.

He found correlations of mountain peaks and valleys with lines of high and low life energies. Lines of high energy connect mountain peaks. These lines he called iyashirochi. Lines connecting valleys have low energy and he called them kegarechi. Kegare is a word denoting negative qualities.

It is difficult to translate iyashirochi. It is related to places of iyashi or iyasaka, which are positive nouns. Kobayashi Bigen Sensei recommends as a toast to abundance and happiness the ancient Iyasaka! rather than the current Kampai or the former Banzai.

Nevertheless, iyashirochi have high electrical potential. Iyashirochi are characterized by an abundance of negative ions which strengthen the body. Also the negative ions balance the positive ions and there is a natural flow of charges, more energy moving. As Alfred Watkins in England showed, ley lines are lines of power. Iyashirochi may be ley lines of similar power.

Dowsing
As is known, dowsing is a technique used to find deposits of water, ley lines, stone walls, and other underground objects. In Japan, a dowser using a branch of the hashibami hazelnut tree can feel certain changes when near such objects. The explanation is given by a physicist from Sorbonne: underground water affects the earth’s magnetic field. The magnetic field is felt by the dowser’s body, and the effect is magnified and made visible by movement of the branch.

A team of three scientists has connected dowsing to megaliths. John Taylor is a professor at Kings College in England. Eduardo Baronofsky is an Argentinian expert. Bill Louis is a dowser with technical experience. He can feel water under stone circles that is flowing to other stone monuments. He places his hands on megaliths and identifies points of circling, spiraling energy. He measures those places and finds that they have twice the magnetic field strength. From these experiments, we may conclude that megaliths do contain significant energy, in the form of magnetic energy.

Scientists and dowsers report that menhirs, dolmens, and other megalithic works have been placed at points of high energy. Generally these are places where ley lines cross. It can also be noted that in Australia, Aborigines hold ceremonies at power points characterized by megaliths and pictures of snakes. Snakes and their brethren, dragons, often represent these ley lines.

On April 14 and 16, 2016, a pair of huge 6.5 and 7.0 magnitude earthquakes and hundreds of aftershocks struck Kumamoto Prefecture on the southern island of Kyushu. The Kumamoto quakes were followed in Ecuador by an even more powerful 7.8M quake on April 18, 2016 causing hundreds of deaths.

For those in the U.S. who wish to contribute to the relief effort in Kumamoto, please visit http://www.lionsroar.com/japan-earthquake-help/. There, you will find several links to relief organizations for Japan, as well as suggestions for sending aid to Ecuador.

The Median Tectonic Line runs through the island of Kyushu and continues into Honshu. Kyushu is the island at the west end of Honshu. The red dot and the label indicate Heitate Jingu, near Mt Aso in Kumamoto. See: https://okunomichi.wordpress.com/2015/07/30/jade-tectonics-and-sacred-sites/, and http://japan-web-magazine.com/en/kumamoto/heitate-jingu. 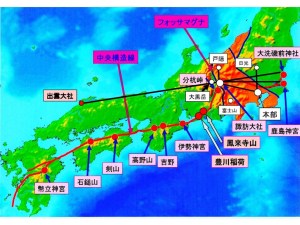 Japan and Ecuador lie on the “Ring of Fire” zone of frequent earthquakes and volcanic eruptions. [Image: https://pubs.usgs.gov/gip/dynamic/fire.html]

Thank you for your sympathy to the victims of the earthquakes in
Kumamoto starting 14th April and for your warm donation to AAR Japan.

Our Response team has arrived at Kumamoto on the following day of the
1st big quake, and provided hot-pot meal to those affected the same day.
Since then, the team is continuing relief activities on the ground.
For details of our activites, please see our English website below.
http://www.aarjapan.gr.jp/english/

AAR Japan is a Japanese NGO with 37 years of experience and currently
operating in 16 countries. We focus on 5 areas – emergency assistance,
assistance to people with disabilities, mine action, actions against
infectious diseases, and advocacy.

Thank you again for your generous support and best regards.